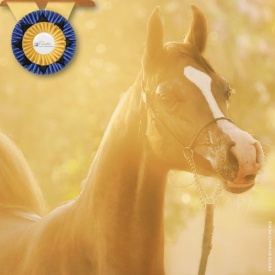 AHA's lowest entry fee Prize Money Program is a one shot competition for 3 year-old horses at both the U.S. and Canadian National Championship Shows.  Arabian and Half-Arabian/Anglo-Arabian foals must have been enrolled in-utero and renominated each year to be eligible to compete.

The Canadian Halter Futurity Classes include:

These classes will be held separate from the U.S. National Halter Futurity Classes and will be adjudicated by a separate panel of judges.

Horses who have not yet entered the U.S. National Championship Show will be able to enter these classes on-line.  Horses that have already been entered into the Show will need to submit an entry form indicating this is an added class for a horse already entered.

For Canadian residents who were paid up in the Canadian National Halter Futurity Program and are unable to attend the 2022 U.S. National Championship Show can submit a written request for a refund of that horse’s Canadian nomination fees.  Refunds will only be issued for the Canadian enrollments for Canadian residents only.  The amount of the refund will depend on the amount that was paid in by the current recorded owner of the horse.   A written request for a refund will need to be received in the AHA office by Tuesday, August 23, 2022, and can be sent to cheryl.holloway@arabianhorses.org

BUY BACK INTO THE HALTER FUTURITY PROGRAM:

All Half-Arabian Halter Futurity, Performance Futurity/Maturity/Derby, AEPA and AWPA classes at U.S. Nationals and Canadian Nationals will require DNA testing.  DNA type of the horse and the horse's Purebred Arabian parent must be placed on permanent record with the AHA Registry and the horse has been shown to qualify as an offspring of the stated purebred sire or purebred dam through DNA type testing. DNA testing will be at the owner's expense and must be on file with the AHA office before the horse will be eligible to compete. If the DNA is not on file at that time, the horse is ineligible to be shown and all nomination fees will be forfeited.